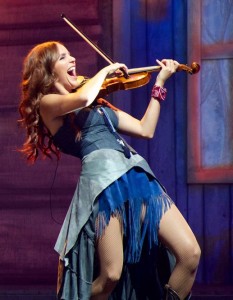 Andrea completed both a Bachelor’s and Master’s degree in viola performance at the University of Cincinnati College-Conservatory of Music (CCM) under the instruction of Masao Kawasaki and Catharine Carroll. While in school she also performed with several city orchestras around Cincinnati and Columbus. During the summers she studied at the Aspen Music Festival, the Chamber Music Festival of Lucca in Italy, and the Henry Mancini Institute in Los Angeles where she sat principal viola.

Jazz was added to her repertoire while an undergraduate, studying under Christian Howes, Brad Goode, Phil Degreg, and Kim Pensyl. She specialized in Brazilian jazz while playing in CCM’s Brazilian jazz combo and she performed alongside Patrick Williams, Joshua Bell, Hillary Hahn, Chris Brubeck, and Johnny Mendel. Her interest in jazz was sparked by many years attending jazz festivals in Michigan with her family.

Having moved to Los Angeles in 2007, Andrea performs both classical, jazz and rock, in combos and orchestras alike, including the Los Angeles Master Chorale and her band Jayar. She has appeared in a national commercial for Cricket Wireless and performed alongside Katie Melua on the Jimmy Kimmel Show. In addition to her private students, she also teaches beginning violin students in the LA public schools both during and after school.

Besides a musician, Andrea is an accomplished fine arts artist and ceramist, and practices yoga regularly. Recently Andrea launched her own greeting card line titled “Alto Designs.”Â She combines her artistic talents as she explores new musical languages and pathways to inspire passion and curiosity in her students.