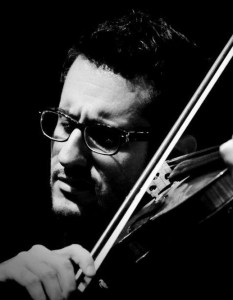 Luis Mascaro (violin) is part of a new generation of creative string players, Brazilian violinist Luis Alberto is not afraid of using his solid classical background to explore new musical ideas, techniques, and sounds. Luis was one of the few selected musicians to perform live at the 50th Grammy Awards with the Foo Fighters and John Paul Jones (Led Zeppelin) in the YouTube contest “My Grammy Moment” in 2008, among thousands of video submissions.

Being one of the few classically trained violinists in his native country to explore alternative styles and techniques on the violin, Luis begun his studies at the age of 9, becoming the concertmaster of his city’s conservatory youth orchestra at 11. Luis holds a double bachelor degree in violin performance and popular music from Campinas State University (UNICAMP) in Brazil. First string player to graduate from the Popular Music degree at that University, he started more and more to venture in different styles such as jazz and Brazilian music. At that time, his activities included founding the only Brazilian Mahavishnu Orchestra cover band, touring with the Comboio Big Band and playing frequently with Chôro musicians.

In 2005 Luis was awarded full scholarship to study at The University of Southern Mississippi, where he had the opportunity to study jazz and improvisation with saxophonist and educator Larry Panella. Luis worked as a Teaching Assistant for the jazz program, teaching improvisation I and II, and coaching the jazz combos as well. After that, he went to study at the University of New Mexico, where he got his MM in violin performance, under the guidance of Dr. Carmelo de los Santos, also on a full assistantship and scholarship award.

This solid traditional education combined with his passion for Brazilian Music and Jazz are making Luis Alberto one of the most engaged and original violinists to develop a creative and unique language that combines popular music and violin playing. He is comfortable playing from Brazilian Choro melodies to intricate bebop tunes, going through fusion, progressive rock and many other styles. Luis researches and explores the use of pick-­‐ ups and electric violins, and has a thorough understanding of amplification and the use of effects for string instruments.

His recent ventures as a jazz violinist include attending to the 2010 Christian Howes Creative Strings Workshop as a scholarship recipient, performing at BIA, Brazil (Brasil Instrumental Andradas), and being Improvisation faculty at the FIMP, Brazil (Festival Internacional de Musica nos Pampas), and at the Festival Musica nas Montanhas (Brazil). In April, Luis taught a 3-­‐day improvisation-­‐for-­‐strings workshop series at the University of North Dakota. In the Albuquerque and Santa Fé area he has performed with musicians such as Rahim Alhaj, Dave Grusin, and Marcos Cavalcante.

Luis is currently living in Los Angeles, CA, and has been recording, performing and teaching workshops in the US and Brazil.